I hate getting calls on injured raptors during nesting season. So when we received a call on an injured Great Horned Owl first thing this morning all I could think about was whether it had an active nest. If it was a female with a brood patch (an area on her lower abdomen where she…

On a Wire – A Story of Courage

Survival against extreme odds requires incredible courage and so we’ve named the Ring-billed Gull now safely in our care Courageous. Our participation in Courageous’ story only began Thursday morning, but Courageous’ fight for survival began sometime on Wednesday. We don’t know exactly when and we certainly don’t know how Courageous became suspended in mid-air just…

I cannot think of a single sound in the world (minus human or animal pain) that ellicits a more visceral reaction in me than the sound of a chain saw. So when two late winter storms with heavy snow caused a domino effect that started with the mid-trunk snapping of a 75’ oak and ended…

In working on content for our new website, we found some release photos and video that I just had to share. No birds were injured in these releases – these are birds that were fully recovered from their injuries and ready for release but simply did unexpected things during their releases. I can only say… 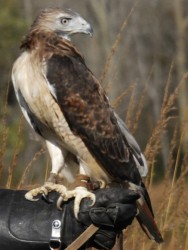 Volo, a male Red-tailed Hawk, came to us imprinted on humans and with a medical condition called Metabolic Bone Disease. Volo was being raised illegally for approximately 3 weeks, with improper diet and with inappropriate contact with humans. When he arrived at Flint Creek, he was not able to stand and he was in significant pain due to calcium depletion is his joints and bones. Volo is a great example just how quickly serious and irreversible damage can occur when animals are raised illegally – even for a short time.

Volo cannot ever be released back into the wild because he is imprinted on humans. 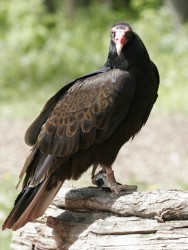 Turkey Junior was found in the winter of 2004 when he was less than a year old. He was on the ground and had been unable to make his migration south due to lead poisoning from eating a wounded animal that was shot with lead shot. Because he was subject to Illinois’ cold temperatures, he also suffered severe frostbite on many of his toes. Most of Junior’s toes had to be partially amputated. Because of the likelihood of future foot problems, Junior was deemed non-releasable. 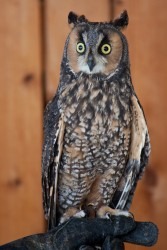 Spirit, a Long-eared Owl, arrived at Flint Creek Wildlife on New Year’s Day 2008. She was emaciated and in extremely low condition. She had been unable to hunt for many days due to the old compound fracture to the wing and she was literally starving. Because the exposed bone was already drying out, we were unable to save the distal portion of her wing. She is a partial amputee and is, therefore, non-flighted and non-releasable. 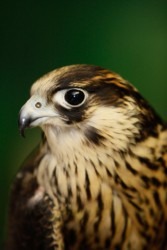 Sovereign, a male Peregrine Falcon, was transferred to Flint Creek Wildlife from the University of Illinois Wildlife Medical Center where he was being treated for a fractured scapula. His right wing is completely fused and he is Flint Creek Wildlife’s most physically challenged birds. Sovereign is completely non-flighted and his cage at Barrington is adapted to his special needs. 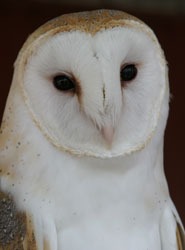 Pip is a captive-bred Common Barn Owl and was the first hatchling from an ongoing Barn Owl reintroduction project designed to reintroduce Barn Owls, an Illinois endangered species, back to the State. Pip, named for when a chick first cracks its shell using its egg tooth, was born in 2002 and is the offspring of two non-releasable education barn owls that have now both passed away. The organization that hatched Pip decided to imprint him on humans and keep him for education.

Although Pip has been kept for education, Pip’s siblings have been released back to the wild. 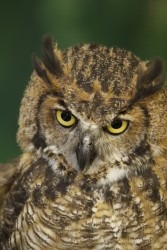 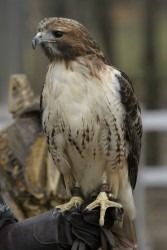 Old Red, a female Red-tailed Hawk, suffered from a broken toe when she arrived into rehabilitation in 1992. Based on her chocolate brown eye color at the time of her admission, her age was estimated at at least 8 years old – meaning that her year of birth is estimated at 1984.

Old Red’s toe did not heal correctly and the bones fused. She now also has septic arthritis and only has about 30% use of that foot. As a result, she would not be able to hunt successfully and is, therefore, non-releasable even though she is fully-flighted.

Old Red has made numerous television appearances and has met various celebrities including the former Chicago mayor Richard Daley. 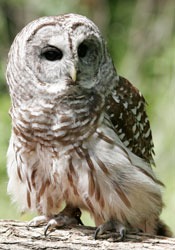 Meepy, a Barred Owl, was found in 1992 and was raised illegally for a period of time before being taken to a licensed rehabilitator. Because she was raised improperly, she is imprinted on humans and cannot ever be released back to the wild.

Meepy is fully-flighted and is used in flight programs. 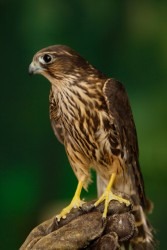 Magic, a female Merlin, arrived at Flint Creek Wildlife with an old fracture to her wing that did not heal correctly. She can fly short distances but cannot fly well enough to survive in the wild. 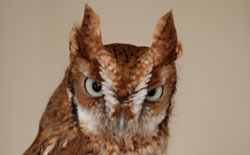 Kotori, a female red-phase Eastern Screech Owl, was brought to Flint Creek Wildlife in 2007 after she had been kept illegally as a pet for approximately 3 months. Her nest tree (Screech Owls are cavity nesters) had been cut down and the people who cut down the tree divided up the nestlings rather than getting them to a licensed facility. We were never able to ascertain what happened to Kotori’s siblings.

Kotori is in perfect physical health but is non-releasable because she is imprinted on humans.