Committed to Providing the Best in Wildlife Rehabilitation

We provide medical care, food, and housing to injured and orphaned wildlife with the goal of returning fully rehabilitated wildlife back to its natural habitat. Whether the animal you found is a critically injured raptor, a small baby squirrel with no fur, a baby songbird, or a coyote with a broken leg, we have the experience and facilities to deal with your animal. Our facilities are equipped with an array of medical equipment and supplies such as IV equipment, incubators, nebulizers, and diagnostic equipment, that allow us to immediately address injuries and diseases. Further, we have the support of some leading veterinarians and veterinary specialists.

When we accept an animal into care, we have made a commitment to the animal and to you, its rescuer. These commitments are reflected in our basic tenets:

Not only are we prepared to address the animal's medical needs but we are also able to recondition and reacclimate that animal in preparation for its eventual release. As part of a complete rehabilitation service, we have outdoor enclosures of various sizes, up to 100' long, that allow the animal to exercise and recondition its muscles. These cages are nestled in a quiet and very private setting that provides them a virtually stress-free environment to help complete their journey back to freedom. 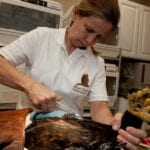 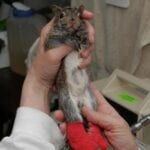 Wildlife rehabilitation is the care of injured and orphaned wildlife by providing medical care, food, and housing while taking precautions to minimize the animals' stress and maintain animals in their natural wild state so that they can appropriately be released back to the wild once they are able to survive on their own. Wildlife rehabilitators hold permits from State and Federal governments for their work and the permits they hold determine what animals they are allowed to accept for treatment. 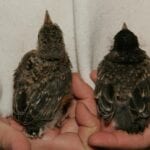 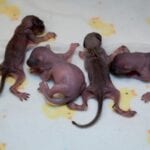 Process our Patients go Through

So what happens to an animal when it's admitted to Flint Creek Wildlife for care? Well, the answer depends on exactly what's wrong with the animal, but every animal goes through three distinct phases of care plus the final release. The phases, critical care, intermediate care and prerelease are described below. The length of time an animal is in each stage of care depends on the nature of injury and the animal's progress as well as weather conditions since moving animals to the prerelease phase and out of the prerelease phase is weather-dependent.

Critical Care - When an animal is first admitted, it is examined to determine injuries or illness, and overall condition. It is then triaged, which addresses immediate medical concerns. The goal of initial triage is often to stabilize the animal, especially in cases of head trauma, blood loss, shock, or dehydration. Animals are almost always in critical care for a period of time that could be as short as a day or as long as weeks or even a couple of months. Critical care doesn't necessarily mean the animal is in critical condition although it might be in critical condition. Animals during the critical care stage are receiving around-the-clock care and are closely monitored. Even if an animal is a healthy orphan, we monitor that animal closely upon initial intake to make sure we don't see any emerging problems and that the animal is stable. For a healthy duckling, it would likely move out of critical care to intermediate care within 24 hours. If a healthy orphaned pinky squirrel, however, it would remain in critical care for a couple of months where it would be in the controlled temperature environment of an incubator, it would be fed around-the-clock on a very rigid schedule, its weight would be monitored daily, and it would be watched for any signs of respiratory or digestive issues. For injured animals, this typically means that the animal is receiving around-the-clock medications and fluids (typically subcutaneous or IV). The animal might be tube fed and in an incubator because it's emaciated. It might have a fracture, wounds, abscesses, or other infections that are being treated.

Intermediate Care - Animals move from critical care to intermediate care as their care requirements diminish. Animals in intermediate care are not in the temperature-controlled environment of an incubator and they are not receiving around-the-clock feedings or medications. Their care typically consists of normal feeding and cleaning throughout the day, which may be only once/day or may be several times/day, depending on species and situation. In intermediate care, the animal is eating on its own and has finished its medication schedule. An orphaned baby squirrel that is fully furred and weaned (or down to a couple of hand feedings a day not requiring around-the-clock care) would be considered intermediate care. An injured adult animal who is no longer requiring wound care, medications or tube feeding, is eating on its own and is in good weight and condition would graduate from critical to intermediate care.

Prerelease - Animals move into prerelease caging in order to recondition their muscles, reacclimate to the outdoors, and demonstrate that they are able to display all necessary skills for survival in the wild. Prerelease cages are large outdoor enclosures, the size depending on the species, but up to 100' long in the case of Eagles. Animals move into prerelease caging when they are in release condition with the exception of this final stage of testing and conditioning. Moving an animal to this stage can be delayed due to weather conditions since we cannot move an animal from 72°F to -20°F. Sometimes, it is necessary to overwinter an animal. The animal generally stays in this stage for at least two weeks and often longer. A general rule is that animals that were in our care longer (critical + intermediate) spend longer in prerelease since their injuries were generally more severe, they probably have more skills to demonstrate and their muscles would have atrophied more. A hawk with a severe wing fracture, for example, would stay in prerelease caging longer than a hawk that had minor head trauma.

Release - The release of an animal is weather-dependent as we generally wait until we have good weather with a clear forecast for the next two days and then it's FREEDOM!! 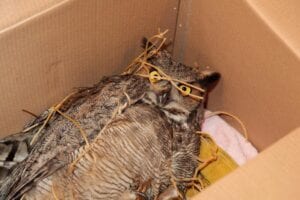 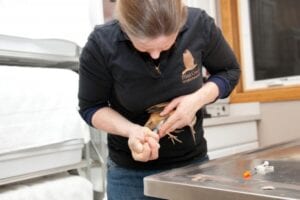 Initial Triage of an American Woodcock 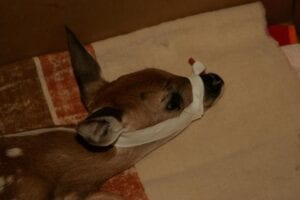 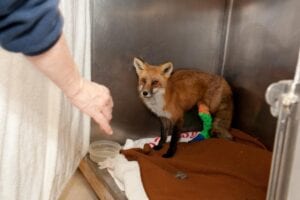 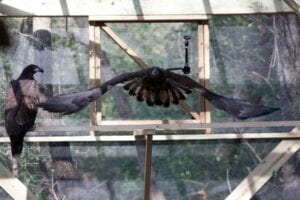 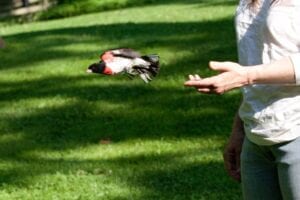 Release of a Male Rose-breasted Grosbeak 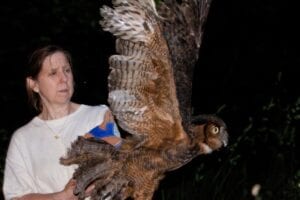 The costs of caring for the animal you bring us depend on many factors, first and foremost the seriousness of the injury and the animal's length of stay. But the component costs of care are varied and sometimes not ones you might imagine when considering how much to donate.

Each animal admitted has costs that are directly attributable to its care. Those direct costs include things like syringes, medicine, bandages, feeding tubes, needles, food, bedding, formulas, and surgery. The cost of medical care is directly attributable to the seriousness and nature of the injuries. An animal that requires intensive care that includes things like intravenous fluids and medications, could easily cost $25–$30 for medicine and medical supplies on the first day alone. Food is also a significant cost. A bird of prey, fox, or coyote could cost $500 in food alone over the course of its stay (more for a large bird of prey like an Eagle).

Each animal admitted also has indirect costs for medical equipment and caging. Over the course of the animal's stay, it might have required an Incubator, a stainless intermediate cage, and one or two outdoor cages during the prerelease phase. Incubators cost us about $900 each and outdoor caging generally costs tens of thousands of dollars each.

And then, we have the overhead of running our facility for things like phone bills...
We know and understand that everyone bringing an animal for care cannot afford to cover its full cost of care, but please consider the costs we incur and give what you are able to afford. And please understand why we need to ask for donations when we accept an animal from you. 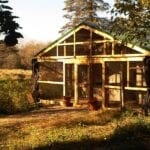 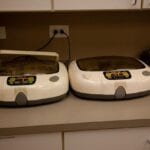 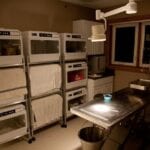